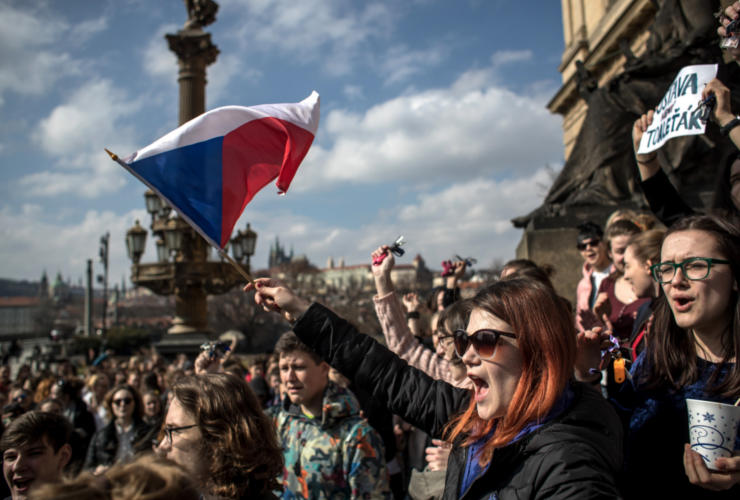 Tens of thousands of Czechs thronged the streets of Prague in one of the largest anti-government protests in the country since the fall of communism, calling on their billionaire prime minister to step down.

Axar.az reports citing Bloomberg that the European Union member’s demonstrations came on the eve of the 30th anniversary of the Velvet Revolution and are part of a global wave of discontent triggered by corruption and abuses of human rights and the rule of law.

But unlike the unrest that has turned lethal and shot down rulers from Lebanon to Bolivia, the Czech protest is unlikely to loosen Premier Andrej Babis' grip on power. Instead, it will most likely resemble the vocal yet inconsequential actions by opposition parties in regional peers Poland and Hungary, where ruling populists have held on to power despite accusations of democratic backsliding.

Waving banners saying “Rule of law” and “We won’t give up freedom,” protesters from across the country poured into a plain in the shadow of Prague Castle, the site of anti-communist rallies that toppled the Soviet-backed dictatorship in 1989. The protests are a continuation of mass rallies against Babis that paused five months ago. No estimates of the crowd size were immediately available.

Organizers accuse Babis of a conflict of interest because he influences policies that affect the agriculture, media and chemical empire that he founded. They pledged to continue with demonstrations until he steps down or sells the business, which he placed in trusts before becoming the premier.