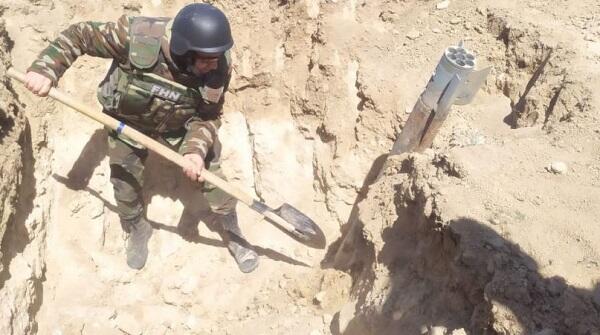 Ammunition was found in Khizi region.

Axar.az reports that with reference to the Ministry of Emergency Situations (MES).

The agency's 112 hotline received information about the discovery of ammunition in an open field near the Gilazi settlement in the Khizi region. Based on the information received, a group of pyrotechnics of the Ministry's Special Risk Rescue Service was involved in the area on April 17, 2021.

Pyrotechnics together with police officers inspected the ammunition after taking the necessary security measures in the area. It was determined that it was one Grad BM-21 projectile.

The ammunition was seized by pyrotechnics, transported to the central destruction area of ​​the Azerbaijan Mine Action Agency (ANAMA) and neutralized.

No other suspicious items were found in the area where the ammunition was found.

It should be noted that the projectile is believed to have hit the area during the fire that broke out on August 27, 2017 in the ammunition depot of the military unit N belonging to the Ministry of Defense.