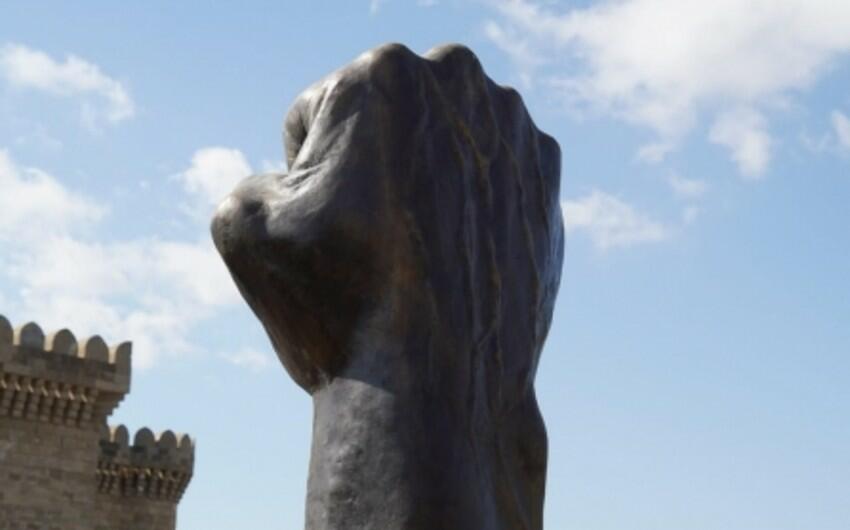 The opening ceremony of the "Iron Fist" monument was held on the occasion of the first anniversary of the Great Patriotic War in the museum complex of the Gala State Historical and Ethnographic Reserve, which operates under the "Icheri Sheher" Museum Center.

E.Manafov was awarded the medals "Participant of the Patriotic War" and "For the liberation of Kalbajar". Participated in the Patriotic War for the liberation of the occupied territories of the Republic of Azerbaijan, inspired by the successful outcome of military operations, inspired by the Great Victory, created the monument "Iron Fist". At the bottom of the monument made of chrome-plated iron, "Karabakh is Azerbaijan!" The slogan was written and the symbol of victory of our Army - Kharibulbul was engraved.

The "Iron Fist" monument, which has become a symbol of successful combat operations by the Azerbaijani Army, is an example of how our people have fought against the invaders for centuries. The "Iron Fist" has also become a national motto of unity and strength under the leadership of the Supreme Commander-in-Chief of the Azerbaijani people and the victorious Army, President Ilham Aliyev, during the 44-day Patriotic War.

The erection of such a monument in the territory of the Gala Reserve is of special importance for visitors to the museum, especially for the younger generation in the study of our history and inculcation of the spirit of patriotism.