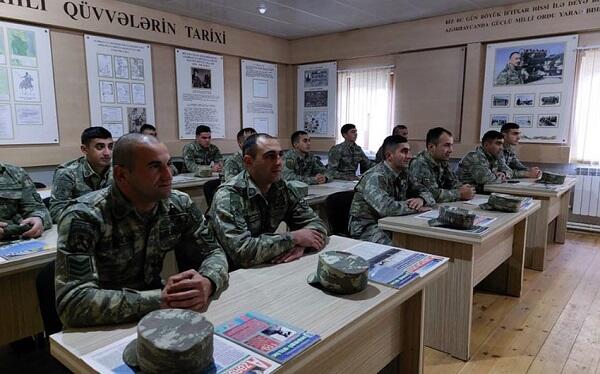 In accordance with the training plan for 2022, approved by the Minister of Defense, Colonel General Zakir Hasanov, activities on the enlightenment of servicemen continue.

As part of the work carried out in this sphere, socio-political training classes are being held with servicemen of the Azerbaijan Army.

During the classes, the Supreme Commander-in-Chief of the Armed Forces, Mr. Ilham Aliyev’s statements about the Azerbaijan Army are brought to the attention of the military personnel and detailed information about the historical significance of the diplomatic activity of the President of the Republic of Azerbaijan is given.

Conversations with servicemen, serving in the liberated territories, are focused on the history of these territories, as well as examples of heroism shown by Azerbaijani servicemen during the combat operations in the Patriotic War.

During the hours of educational work, political education, and at leisure time, enlightening conversations and an extensive exchange of views are held with servicemen, their questions are answered and they are given the necessary recommendations regarding military service.