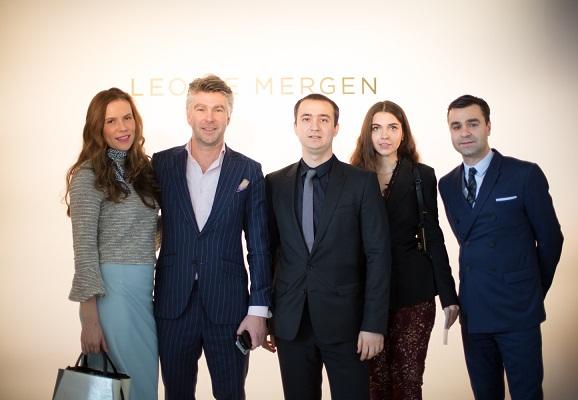 An extraordinary event within the scope of the MERCEDES BENZ FASHION WEEK in Berlin took
place on Wednesday, January 18th 2017 under the patronage and with the support of The European
Azerbaijan Society Germany (TEAS). The Berlin based young and fresh designer Leonie Mergen
presented her new outstanding « Karabakh Collection » on the runway, which features the theme and
the culture of Karabakh, an Azerbaijani region in the center of the South-Caucasus.

With the rich cultural heritage of Azerbaijan as her inspiration, Leonie released her current collection, a
series of pieces inspired by the traditional attire of Azerbaijan’s Karabakh region. The ensembles
feature patterns reminiscent of the country’s famous tapestries, with signature necklines and sleeved
capes making an appearance in both menswear and womenswear clothing. Azerbaijan’s legacy as a hub
on the historical Silk Road and as a leader in horse breeding can be seen in Leonie’s designs, with
equestrian-influenced leather accessories and sophisticated silk elements playing an essential role in her
collection.

In the presence of over 500 fashion industry professionals, fashion reporters and international guests
the highly atmospheric show took place in historic Kaufhaus Jandorf in Berlin Mitte. The show started
at 12.00 pm and lasted half an hour. The collection was presented on the catwalk in 26 distinct looks
while traditional Azerbaijani Mugam and instrumental music was playing in the background. Leonie
Mergen’s unusual and intercultural as well as technically skilled approach was highly appreciated by the
attendees. The audience was enthusiastic and celebrated the Karabakh Collection which represents a
further milestone in the The European Azerbaijan Society’s continuous efforts to raise awareness about
the ongoing occupation of Nagorno-Karabakh by Armenian forces.

The Nagorno-Karabakh conflict was fought from 1988–94, between Azerbaijan and Armenia over
Azerbaijani territory in the west of the country populated by both Azerbaijanis and ethnic Armenians.
However, the history of this dispute stretches back for centuries. As a result of this one-sided illegal
invasion, Armenia still occupies Nagorno-Karabakh and seven surrounding provinces, altogether about
20% of Azerbaijan’s territory, and nearly one million Azerbaijani refugees and internally displaced
persons (IDP’s) have been forced out of their homes. Nagorno-Karabakh is universally recognised by
the international community as being part of the sovereign territory of Azerbaijan. The United Nations
Security Council condemned the ongoing occupation in four resolutions and called for the immediate
withdrawal of the Armenian forces.

Press release A (WITH TEAS)

Tale Heydarov, Chairman and Founder of TEAS stated: « The Karabakh Collection is a very interesting
project for TEAS, and we were happy to give Leonie Mergen, a young Berlin designer, the chance to
present Azerbaijan inspired fashion to a worldwide audience and to support her during her inspirational
journey through our country. » Concerning Nagorno-Karabakh he continued: « A fashion collection
with this degree of international coverage and attention helps a great deal to show to a wider public,
that there is an occupied Azerbaijani region called Nagorno-Karabakh and that steps have to be
undertaken to protect our national heritage in all areas of culture and civil society. »

The fashion show was followed by a press get-together and resee where further details of the collection
of Leonie Mergen were revealed.