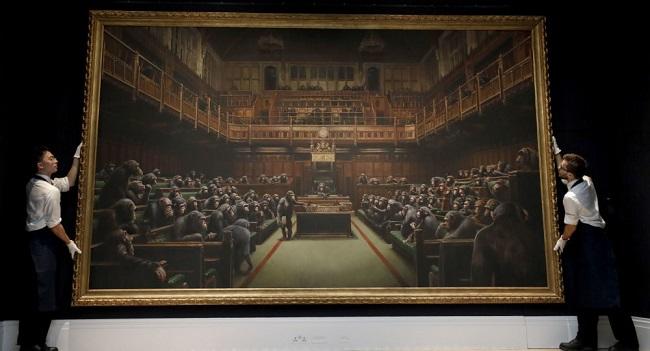 Axar.az reports citing foreign media that the world-famous painting was sold for almost nine times its previous price after a 13-minute bidding war, Sotheby’s auction house announced in a tweet.

The work was originally called “Question Time” and displayed back in 2009. However, the “Devolved Parliament” item sold Thursday has some differences with the earlier version, according to the New York Times.

In a statement to the Times, Sotheby’s confirmed that the work being sold was the “Question Time” original, but “the painting has been reworked by the artist and more recently retitled.”

The picture went to the auction after the painting’s then-owner put it back on display at the Bristol Museum to mark 10 years since the “Banksy versus Bristol Museum” show and comes just ahead of the Brexit deadline of October 31.

Banksy’s last work at Sotheby’s, “Girl with Balloon,” was sold for $1.4 million before shredding itself to the shock of onlooking bidders. That painting was renamed “Love is in the Bin” following the spectacle.