Days of Azerbaijani films kick off in Mexico 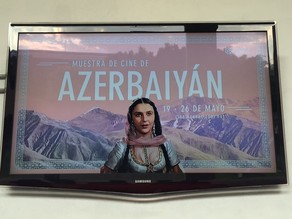 Days of Azerbaijani films have started in CINETECA, Mexico city, jointly organized by the National Film Archive of Mexico (CINETECA), Embassy of Azerbaijan to Mexico and Azerbaijan's Ministry of Culture and Tourism.

It was told by Embassy of Azerbaijan to Mexico.

7 films - 'Arshin mal alan', 'If Not That One, Then This One', 'Bat', 'Steppe-dweller', 'Other time', 'Nabat' and 'Down the river' feature films will be shown within the film days, which have been organized to strengthen cultural relations between Azerbaijan and Mexico, familiarize Mexican audience with Azerbaijani films of gold, medium and modern period. The event will last till May 26.

'Arshin mal alan' film was shown at the opening ceremonu of the event.

Notably, Azerbaijani films are demonstrated with Spanish subtitles. Subtitles have been translated into Spanish by CINETECA.