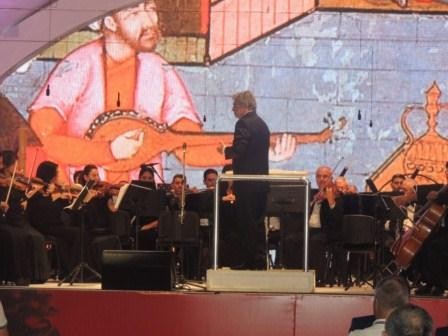 A message of greetings of Azerbaijan`s first lady, president of the Heydar Aliyev Foundation, UNESCO and ISESCO goodwill ambassador Mehriban Aliyeva was read out at the ceremony, which was held at an open-air stage outside the Heydar Aliyev Congress Center in Gabala.

Special guests of the festival, composer and singer, People`s Artist, Azerbaijani Ambassador to Russia Polad Bulbuloglu addressed the ceremony to highlight the importance of the festival. He thanked President Ilham Aliyev and first lady Mehriban Aliyeva for organizing “such a beautiful music festival”. He performed folk songs and other compositions accompanied by Azerbaijan State Symphonic Orchestra, which was conducted by his son Murtuza Bulbul.

This year`s edition of the festival brings together world-renowned musicians, art ensembles, soloists and conductors from Azerbaijan and a number of foreign countries. It will also feature a piano contest.