DiCaprio gets his first Oscar (Photo) 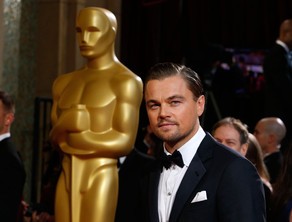 On his sixth try, Leonardo DiCpario finally got his first Oscar.

The 40-year-old A-lister finally won the best actor Oscar for his performance as tracker Hugh Glass in for "The Revenant".

DiCaprio had previously been nominated four times as an actor: for his supporting turn in “What’s Eating Gilbert Grape” (1993), his portrayal of eccentric millionaire Howard Hughes in “The Aviator” (2004), his tour of duty as a South African mercenary in “Blood Diamond” (2006) and as real-life, corrupt stockbroker Jordan Belfort in “The Wolf of Wall Street” (2014).

Best Documentary Short Film: “A Girl in the River: The Price of Forgiveness”

Best Animated Feature Film: "Inside Out"