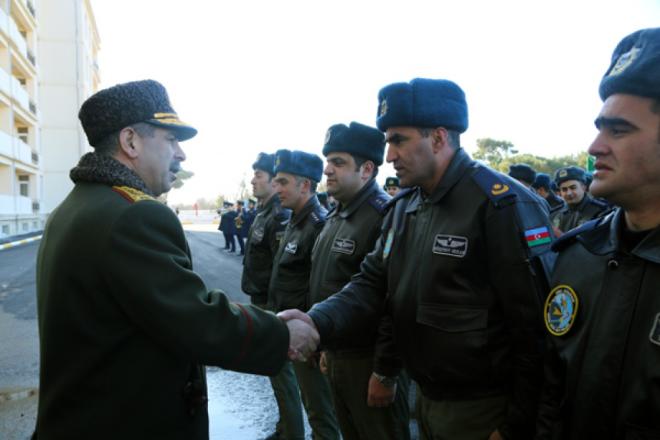 According to the instruction of the President of the Republic of Azerbaijan, Supreme Commander-in-Chief Ilham Aliyev regarding to the improvement of the social conditions of the Armed Forces, the opening of another new residential building is held at the air base of the Air Force on January 6.

Axar.az reports referring to Defence Ministry, during the meeting with the flight and technical staff, as well as members of their families at the ceremony of handing the keys to the service apartments, Defence Minister Colonel General Zakir Hasanov congratulated the participants of the event on behalf of the ministry's leadership.
It was noted that as a result of the state's care, more than 1,000 servicemen were provided with permanent housing, and up to 1,400 were provided with service apartments in recent years. Works in this sphere will be continued this year.
During familiarization with the new building, Minister was reported that the five-storey building consists of a fully renovated 50 three-room apartments, which are equipped with all the lines of communication. All the necessary conditions for a pleasant stay of servicemen and their families are created.
Servicemen who were provided with apartments expressed their gratitude to the Supreme Commander-in-Chief of the Armed Forces Mr. Ilham Aliyev.
After handing the keys, Defense Ministry's leadership got acquainted with the conditions created in the apartments.