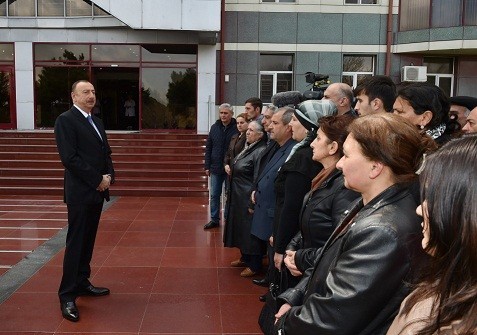 Azerbaijani army gave the enemy a deserved response, intercepting their provocation, Azerbaijani President, Supreme Commander-in-Chief Ilham Aliyev said during a meeting with the families and relatives of a group of the wounded soldiers.

President Aliyev on Tuesday visited the wounded soldiers in the Central Military Clinical Hospital of the country’s Defense Ministry.

“You fought and got wounded for the motherland. The motherland appreciates it a lot. The Azerbaijani people are proud of you,” the president said, thanking the wounded soldiers.

“You got wounded in fighting but you’re victorious. The situation on the contact line showed that the Azerbaijani army, Azerbaijani officer, Azerbaijani soldier is truly a hero,” President Aliyev said.


Restoring our territorial integrity is the sacred duty upon on every Azerbaijani citizen, according to the head of state. “Sons like you promote our motherland. The military operations that you carried out will be written in military books in future”.