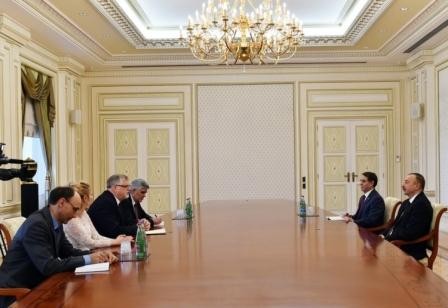 President of the republic of Azerbaijan Ilham Aliyev has received a delegation led by the European Union Special Representative for the South Caucasus Herbert Salber.

Herbert Salber recalled the last visit of Vice-President of the European Commission, High Representative of the European Union for Foreign Affairs and Security Policy Federica Mogherini to Azerbaijan. He said they were concerned about the escalation on the line of contact of Armenian and Azerbaijani troops. Herbert Salber said the EU expressed its position on the latest developments on the frontline during the plenary session of the European Parliament, adding that discussions were held on the issue. Herbert Salber said the problem would be discussed by the Foreign Affairs Council in Luxemburg next week. It was noted that the Armenian armed forces regularly committed military provocations on the line of contact throughout the history of the negotiations to find a solution to the Armenian-Azerbaijani Nagorno-Karabakh conflict. The Armenians regularly shell the Azerbaijani settlements near the line of contact, killing civilians, including children, women and the elderly with the aim of perpetuating the current state of the conflict.


They exchanged views over the ongoing processes of settlement of the Armenian-Azerbaijani Nagorno-Karabakh conflict, as well as the current state and prospects of cooperation between Azerbaijan and the European Union.