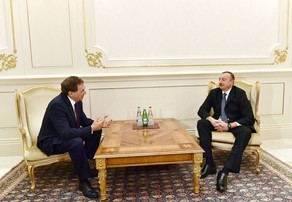 President of the Republic of Azerbaijan Ilham Aliyev has received Secretary General of the Socialist International Luis Ayala.

They exchanged views over the current status of the Armenian-Azerbaijani Nagorno-Karabakh conflict, and also discussed prospects for cooperation between the Socialist International and Azerbaijan, and international cooperation.

After the meeting they posed for photographs.