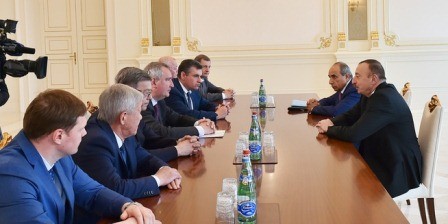 President of the Republic of Azerbaijan Ilham Aliyev received a delegation led by Deputy Prime Minister of the Russian Federation Dmitry Rogozin on 18 May.

The head of state said relations between Russia and Azerbaijan had been developing successfully and dynamically, and noted that the visit of the Russian Deputy Premier to the country opened good opportunity to discuss the issues on the agenda of the bilateral relations.

President Ilham Aliyev hailed Dmitry Rogozin's role in expanding the bilateral ties between the two countries as a co-chair of the Azerbaijan-Russia Joint Intergovernmental Commission.

The President highlighted Azerbaijan`s activity as part of the Commission, saying the country spares no efforts to develop the ties.

President Ilham Aliyev said the results achieved are quite positive amid the global economic crisis, and noted that there were great opportunities for expanding the existing potential.

The head of state pointed to broad spectrum of cooperation, which evolves all spheres of the bilateral ties, as well as foreign policy, economic, social, humanitarian and other fields.

The President noted that trade and economy became key priorities of the relations, and expressed confidence that the potential in this sphere would continue to increase.

President Ilham Aliyev highlighted the importance of the meeting in terms of reviewing the work done and determining future steps.

Russian Deputy Prime Minister Dmitry Rogozin stressed the significance of the meetings of the Azerbaijan-Russia Joint Intergovernmental Commission for cooperation in trade, economic, cultural, educational and other fields in terms of the development of collaboration.

The Russian Deputy Premier noted that such meetings yielded good results in terms of controlling the ongoing work and the agreements reached. Dmitry Rogozin said Azerbaijan and Russia are now holding talks on a joint project in the field of mechanical engineering, which is of particular importance and can be a promising area for both countries.