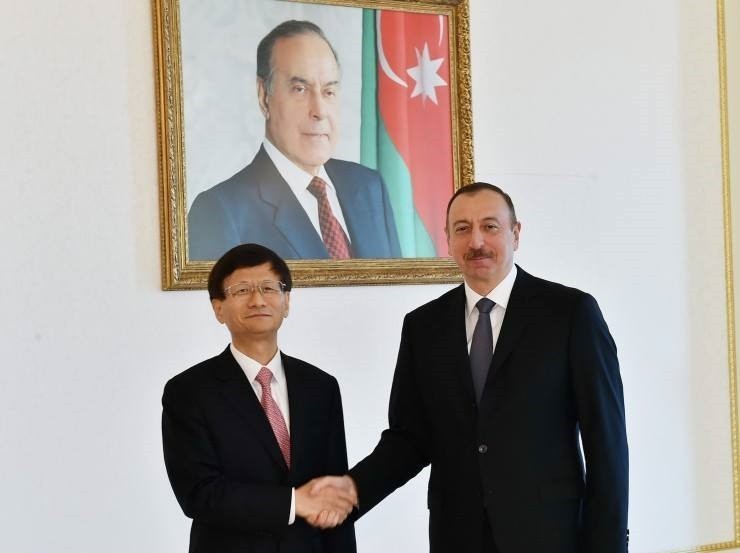 President of the Republic of Azerbaijan Ilham Aliyev has today received a delegation led by special envoy of the President of the People's Republic of China, member of the Politburo of the Communist Party, Secretary of the party`s Central Political and Legal Affairs Commission Meng Jianzhu.

President Ilham Aliyev expressed his confidence that the visit of the Chinese delegation led by the President`s special envoy Meng Jianzhu would be successful and contribute to the strengthening of the friendly ties between the two countries. Saying that the bilateral cooperation covered many spheres, the head of state noted that relations between Azerbaijan and China were successfully developing in political, economic, transport, trade and humanitarian areas. The President said that the expansion of cooperation in the areas of law-enforcement and security could contribute to the strengthening of the bilateral relations.

Special envoy Meng Jianzhu thanked the Azerbaijani President for high hospitality. He extended the greetings and best wishes of President of the People's Republic of China Xi Jinping to the head of state. Meng Jianzhu said his delegation included senior officials of all law-enforcement and security bodies and the Ministry of Foreign Affairs. Saying that the people of China had great respect for national leader Heydar Aliyev and President Ilham Aliyev, he noted: "Heydar Aliyev is the national leader of the people of Azerbaijan in a true sense of the word. You successfully continue his policy. Under your leadership, Azerbaijan`s economy is rapidly developing, public and political stability has been fully ensured, people enjoy high spirits and mood."

Meng Jianzhu said China was interested in expanding cooperation with Azerbaijan in the fields of security, law-enforcement, fight against terrorism, transnational economic crimes, cybercrimes, as well as in ensuring security along the Great Silk Road. He pointed out that cooperation in the field of security could contribute to regional cooperation. The Chinese President`s special envoy described the Great Silk Road project as a promising one.

Meng Jianzhu hailed the Azerbaijani President`s state visit to China as successful, saying important documents on the expansion of cooperation were signed during the visit. He also noted that presidents Ilham Aliyev and Xi Jinping enjoyed friendly ties, saying China regarded Azerbaijan as a friendly and fraternal country.

Meng Jianzhu said the main goal of the visit was to give impetus to the execution of agreements achieved by the heads of state during the Azerbaijani President`s state visit to China. The special envoy said that prior to visiting Azerbaijan he met with President of the People's Republic of China Xi Jinping, who described Azerbaijan as a beautiful country and expressed his desire to visit it.

President Ilham Aliyev thanked the Chinese President`s special envoy for kind words about national leader Heydar Aliyev and Azerbaijan. The head of state said that national leader Heydar Aliyev played an exceptional role in the establishment of fundamental principles of bilateral relations between Azerbaijan and China. The President said that founded by the national leader, internal and foreign policy as well as the policy of development of relations with China successfully continued. Saying that China was a friendly and fraternal country for Azerbaijan, President Ilham Aliyev said that development of ties with China was among key foreign policy priorities of Azerbaijan. The head of state said that this was once again evidenced by the meetings and fruitful discussions held during his visit to China.

The President pointed to good prospects for cooperation in transportation of goods by railway from China to Europe passing through Azerbaijan, adding that active work was conducted in this regard. Underlining the importance of Azerbaijan-China cooperation in combating terrorism, extremism and separatism, President Ilham Aliyev said Azerbaijan faced Armenian terrorism and separatism. He noted that the Armenian-Azerbaijani Nagorno-Karabakh conflict must be solved in accordance with norms and principles of international law, within Azerbaijan`s territorial integrity.

The head of state reaffirmed Azerbaijan`s support for territorial integrity of China.

President Ilham Aliyev said Azerbaijan was interested in having more Chinese companies involved in its economy and expanding tourism cooperation. The head of state thanked China for its support when Azerbaijan was granted a dialogue partner status by the Shanghai Cooperation Organization. The President added that active cooperation with the organization was among key foreign policy priorities of Azerbaijan.

President Ilham Aliyev thanked for the greetings of President Xi Jinping and asked the special envoy to extend his greetings to the Chinese leader. The head of state invited Xi Jinping to pay an official visit to Azerbaijan at his convenience.

Results of the Vienna meeting on the Nagorno-Karabakh conflict was discussed during the meeting. The Chinese side said they wanted the conflict to be solved peacefully.