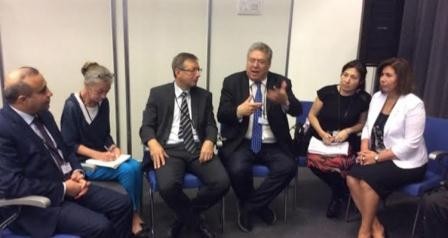 A meeting between Azerbaijani, Armenian, Georgian and Swiss parliamentarians took place in Tbilisi July 3 on the sidelines of the 25th annual session of the OSCE Parliamentary Assembly.


The meeting was held on the initiative of the head of the Swiss delegeation to the OSCE PA, Philipo Lombardi.

The meeting was attended by the head of the Azerbaijani delegation to the OSCE PA, vice-speaker of the Azerbaijani parliament, Bahar Muradova, the vice-chair of the OSCE PA General Committee on Political Affairs and Security, Azay Guliyev, the head of the Armenian delegation to the OSCE, Artashes Geghamyan, the chairman faction Georgian Dream, Gia Volski, Georgian MP Tedo Japaridze, as well as a number of Azerbaijani, Armenian, Georgian and Swiss MPs.


In this speech, the Swiss delegation head noted the importance of intensifying the negotiations between Azerbaijan and Armenia, offering to change the negotiation format.

Geghamyan, for his part, said that “if we want to move forward and make a “revolution” in the negotiations, a smart “uncle” should not decide the fate of the people.


“Our presidents are in serious talks. Frances president is likely to join this process in the near future. I want the negotiations to be joined by members of the Minsk Group and the representatives of Nagorno-Karabakh” said the Armenian delegation head.

Muradova in his speech noted that Nagorno Karabakh is part of Azerbaijan.


“No country recognizes the separatist regime in Nagorno-Karabakh and the participation in the negotiations as a party is impossible” stressed the Azerbaijani delegation head.

Addressing the meeting, Azay Guliyev said that Azerbaijan is facing no problems in the negotiation process. “In the world there was no country called “Nagorno-Karabakh Republic”, and our good will in all meetings and negotiations is known,” he added.

The Georgian MPs who attended the meeting expressed their attitudes towards the Armenia-Azerbaijan negotiation process on peace settlement.