"I hope that territorial integrity will be restored" 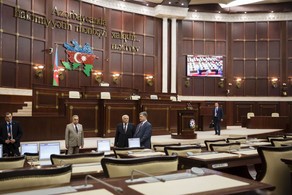 As part of an official visit to Azerbaijan, President of Ukraine Petro Poroshenko has met with Chairman of Azerbaijani Milli Majlis, Speaker Ogtay Asadov.

According to the website of the Ukrainian president, the head of Ukrainian state expressed confidence that intensification of cooperation between Ukraine and Azerbaijan, reopening of the Council of Azerbaijani and Ukrainian Presidents and implementation of joint projects will give a positive result.

The two sides commended the active inter-parliamentary friendship groups in the Verkhovna Rada of Ukraine and Milli Majlis of Azerbaijan.

Poroshenko and Asadov stressed the need to coordinate an interaction of the two states in the framework of the OSCE Parliamentary Assembly, Council of Europe and other international bodies.

During the visit to the Azerbaijani Parliament, the head of Ukrainian state visited the session hall, and got acquainted with the organization of works. Poroshenko also visited the Museum of the national leader of Azerbaijan Heydar Aliyev and signed a book of honorable guests of the museum.