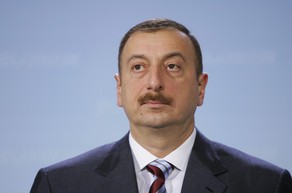 During the meeting of Council of CIS Heads of States in Bishkek president of Armenia Serj Sarkisian complained about Azerbaijan because of incidents happened at the frontline during April of current year. He said that Azerbaijan side has violated ceasefire.

- I see it as my duty to comment on the Armenian president’s remarks. Given that the issue of resolving the Nagorno-Karabakh conflict is being settled in other international structures, I didn’t consider it necessary to speak about this topic today. However having heard yet another complaint from Armenian side, I think it is proper to answer to these complaints.

Armenian side has already harassed international organizations with their complaints. Can you imagine, situation is quite paraxial: Armenia occupies area of the sovereign country, banishes local Azerbaijani citizens from Nagorno-Karabakh and seven districts which are adjacent to Nagorno-Karabakh, makes one million person immigrants and refugees, destroys everything in occupied areas including historical and cultural sites, monuments and places and infrastructures,- it’s approved by OSCE’s two missions’ reports- and after that they imitate negotiations for more than 20 years.

International organizations know very well how to adjust this issue. The Security Council of UNO decided 4 resolutions in 1990. According to the terms of these resolutions Armenian side must leave area of Azerbaijan immediately and unconditionally. So far these resolutions are not implemented. Armenia doesn’t care about these terms and conditions and tries to create new realities by changing borders and doesn’t leave Nagorno-Karabakh Autonomous Province. This is illegal, homicide and it still continues.

We are keeping our loyalty to the peace process. We are working constructively. There is Minsk group. But Armenian side uses it only for making negotiations infinite. They don’t want peace. They want to keep our areas which they have occupied and want to charge us with breaking rules. We are victims. We haven’t occupied anyone’s area. 20% of our area is under occupation which is known by international union. These are realities. Taking Armenian president’s complains I saw it as a duty to tell you these realities.

Serj Sarkisian: There is no meaning in answering to the lie

İlham Aliyev: I have already answered to the lie