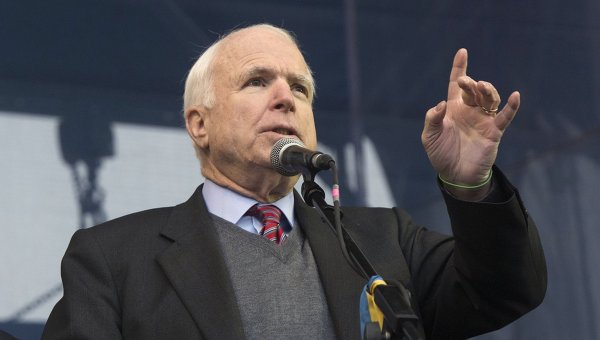 "China is the only one that can control Kim Jong Un, this crazy fat kid that's running North Korea," said McCain, who also serves as the chairman of the Senate Armed Services Committee.

In an interview with MSNBC’s Greta van Susteren, McCain said of China: "They could stop North Korea's economy in a week."

"They haven't, because the Chinese have to understand there's a penalty ... imposed by us if they don't reign in an individual that can literally start a world war, and more importanty, perhaps in the short term, strike the United States of America."

Sharing both a border and storied history, China has had close relations with North Korea, perhaps moreso than any other country, and has taken the role of its "big brother." North Korea, which conducts about 90% of its trade with China due to restrictions imposed by other world powers, was recently banned from exporting coal, its primary export, to China — one week after it test-fired a missile in February.

McCain continued, saying Kim Jong Un is "not rational ... we're not dealing with even someone like Joseph Stalin, who had a certain rationality to his barbarity ... The first place I'd go is China, and say 'Look, you can shut down their economy ... it's in your interest to do so.'"

"If the Chinese refuse to do that, we have to consider all options, and not necessarily a world war, but Mr. Kim Jong Un needs to understand that there's a huge penalty to pay if he even tried it."