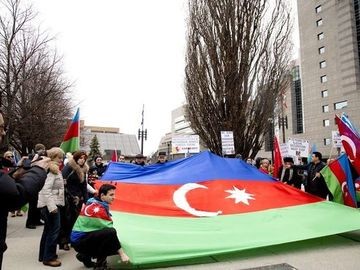 Azerbaijanis residing in Canadian Toronto held a protest action due to the next Armenian aggression in the Azerbaijan's Nagorno Karabakh region and shelling of civilians by Armenian armed forces near the contact line.

The action involved more than 100 people.

The participants of the action chanted 'Keep your hands off Azerbaijani land Karabakh!', 'Wake Canada! Support justice! Support Azerbaijan!', 'Armenia, obey the UN Resolutions and withdraw armed forces from Karabakh!' and other slogans.