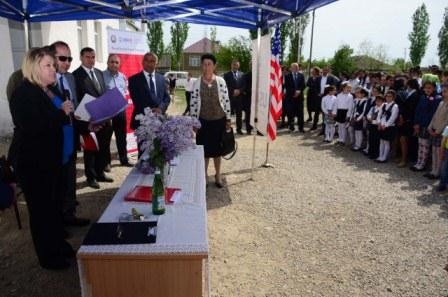 Residents of the Ashaghi-Atuj community of Guba district gathered to celebrate the completion of a project to improve the heating system at the local school. They were joined by the representatives of the local Executive Committee and municipality, officials from the Ministry of Economy, and the United States Agency for International Development (USAID). The project was implemented by the East-West Management Institute (EWMI) under the Socio-Economic Development Activity (SEDA) co-financed by the governments of the United States and Azerbaijan.

The school was built in 1990 and has relied on outdated heating systems, including electric ovens and wood stoves for years, exposing children to toxic fumes and fire hazards. This affected the students' health, their attentiveness to lessons, and their winter attendance.

With support from EWMI/SEDA, the community residents worked with their local and regional governments to construct a separate boiler room and install 37 radiators, which now provide a safe and warm classroom environment to 340 children and nearly 40 teachers.

To date, EWMI/SEDA has provided more than $1.4 million in funding for 69 projects in 61 communities benefiting more than 94,000 people around Azerbaijan. EWMI/SEDA promotes fuller participation of citizens, civil society organizations and local and central government officials to advance socio-economic development. The project is funded by USAID and implemented with support from the Ministry of Economy and the Council for State Support to Non-Governmental Organizations and with assistance from a local non-governmental organization, UMID.