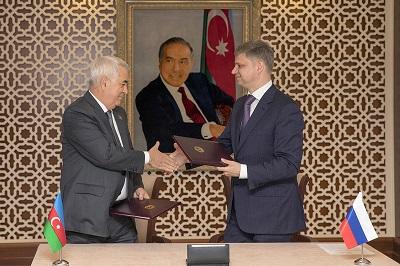 A meeting with a delegation led by Oleg Belozerov, Director General of Russian Railways OJSC, was held at Azerbaijan Railways CJSC.

Before the meeting, the members of the delegation visited the Alley of Honor, where they laid a wreath and flowers at the graves of Azerbaijani national leader Heydar Aliyev and prominent ophthalmologist, academician Zarifa Aliyeva.

During the meeting at the Azerbaijan Railways CJSC, the Chairman Javid Gurbanov informed the guests about Azerbaijan’s transport and logistics potential and international transport corridors.

While speaking about the North-South International Transport Corridor, Gurbanov stressed that this corridor not only will expand trade and economic relations among Iran, Azerbaijan and Russia, but will also play an important role in the development of other regional countries that will carry out export-import operations along this route, by increasing trade turnover. Then discussions on the further expansion of bilateral cooperation ties were held.

Following the meeting, a memorandum on the development of cooperation between the railways of Azerbaijan and Russia was signed. The document was signed by Gurbanov and Belozerov.

The memorandum is aimed at implementing the coordinated policy for the development and operation of the Eurasian international transport corridors, as well as expanding foreign economic relations and ensuring optimal transport conditions for transit traffic.