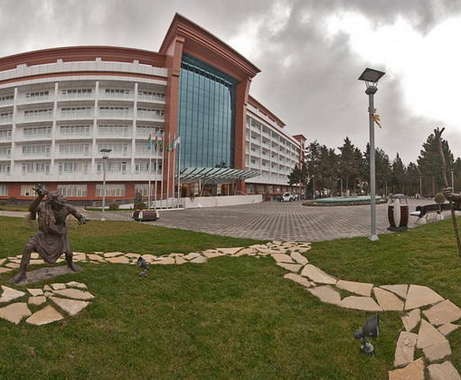 Bathing in crude oil, commonly referred to as “black gold”, has become a very popular trend in medical practice of Azerbaijani health resorts.

Naftalan oil, a unique source of the Land of Fire considering a remedy of many diseases, popularized Azerbaijan long before the oil boom that made Baku world famous in the 19th century.

The healing properties of this special type of oil is known to medicine for over 600 years and have been successfully used in the treatment of various diseases.

As it penetrates the skin, the oil accelerates the metabolic process, boosting cell regeneration. It has a calming, cooling and antiseptic effect, relieves joint pain, cures psoriasis, calms the nerves and beautifies the skin.

Head of the information and analysis sector of Naftalan region Executive Power Ulfat Aliyev said that large-scale work is carried out in order to make Naftalan resort city to one of the centers of international tourism.

As for the few several years great strides were made for the development of the tourism in Naftalan and promotion of this health center abroad.

The reconstruction work in the resort town in accordance with the State Program on development for 2014-2018 has made the center, known since 1926, even more modern and attractive.

“New wellness centers of international level such as Chinar Hotel & Spa Naftalan, Naftalan hotel Qashaltı and Garabag Resort & Spa have been built here. Conditions here are excellent not only for recreation, but also for treatment. Some eight tourist facilities operating in Naftalan area able to accommodate over 2,000 guests daily,” he said.

Resort town Naftalan attracts tourists not only in summer but also in winter. Only last December some 1,300 tourists visited Naftalan.

“Last year more than 16,000 national and foreign tourist visited Naftalan. This is more by six times compared to the past five years.

Medical value of Naftalan is known beyond the country and foreigners come to Azerbaijan to experience these oil baths, resembling a chocolate fountain. Being one of the most ancient resorts in the world, today Naftalan attracts people from all over the planet.

“At the same time, the number of foreign tourists arriving in Naftalan are rapidly increasing. In this period, more than 3,000 foreign visitors came to Naftalan from 42 countries, including Germany, Turkey, Canada, Poland, France, Italy, Japan, China, Spain, Russia, Uzbekistan, Kazakhstan, Ukraine and others,” Aliyev noted.

The expert added that resort cities of other countries seeking to establish international ties with Naftalan.

“Currently, Naftalan is cooperating with a French city, Italian town of Positano, Russian city of Yessentuki and the Polish town of Uniejów,” he said.