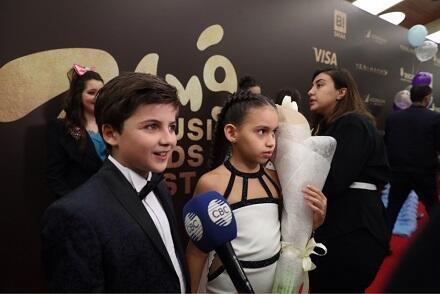 On December 14, the Heydar Aliyev Palace hosted a gala concert of the next International Children's Festival "Zima-2019" with the support of the Beat Group and the Ministry of Culture.

This year, 110 children applied for the festival, and the committee selected 20 of their best performers. The presenters were young artists Rufat Mammadov and Suel Heybatova, whom we know better than previous festivals.

Before the concert, the participants passed the red ball and shared their impressions of the festival. “Sound. The winner of the show's sixth season, Ercan Maxim, expressed his admiration for the high level organization of the Zima Festival and thanked the organizers for the opportunity to come to Baku and perform in front of the Azerbaijani audience. The organizer of the festival Rufat Mammadov wished success to all the participants and said that the audience is waiting for interesting performances. Thanks to the Zima Festival, many new friends can be found, ”he said.

Bright performances of young talents were met with great interest. Representatives from Turkey, Ukraine, Georgia, Kazakhstan, France and the United Kingdom also performed at the Palace.