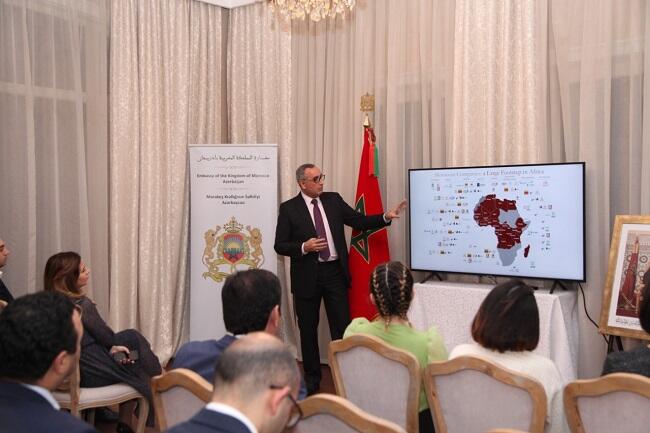 The Embassy of the Kingdom of Morocco in Azerbaijan organized a meeting with businessmen working in the agricultural sector with the support of Agrarian Procurement and Supply OJSC.

Axar.az reports the Moroccan Embassy made two presentations during the event aimed at developing economic relations between Morocco and Azerbaijan.

The event, which was announced by the ambassador's speech, was first presented with an overview of Morocco.

Emphasizing that Azerbaijan and Morocco are two brotherly countries, the ambassador said that WTO was established in 1994 in Morocco.

Speaking about Morocco's free trade agreement with Norway, Switzerland, USA, Turkey, Arab countries and Africa, the ambassador said that thanks to this policy, Morocco is a billion-dollar market:

Moroccan Company is a Large Footstep in Africa. It covers mining, banking, air transport, real estate, and construction, ICT & Media and more. Speaking about the strategic and economic importance of Tanger-Med, the ambassador added that Morocco's Global Trade Network covers 187 ports and 77 countries.

The second presentation made at the event was about the International Agricultural Fair of Morocco (SIAM) held annually in Morocco:

“SIAM was initiated in 2006 by His Majesty Mohammed VI, the King of Morocco. It is the Largest Agricultural Fair in Africa and one of the largest worldwide. SIAM 2020 will take place on April 14-19. The 18HA total exhibition area is expected to feature 900K visitors, 65 participating countries, 40 conferences,50 agreements signatures at the exhibition this year.