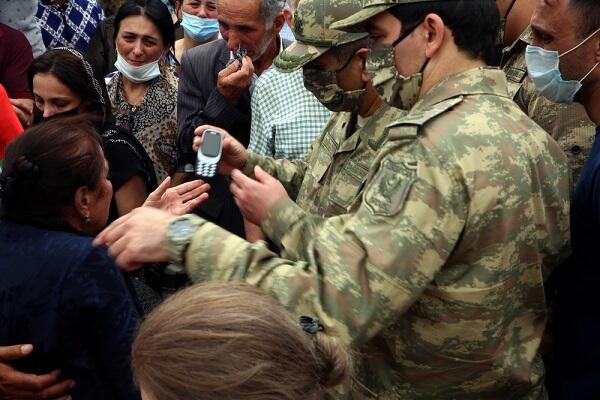 During the ceremony, President of the Republic of Azerbaijan, Supreme Commander-in-Chief of the Armed Forces Ilham Aliyev expressed his deep condolences to the families of our martyred servicemen over the phone.

Axar.az reports that the leadership of the Ministry of Defense informed the families of our martyrs and all the participants of the ceremony that the blood of our martyrs has not remained on the ground and will not remain in the future.

The Defense Minister presented the tricolour Azerbaijani flag on the coffins of our martyrs to their families for eternal remembrance.

Major-General P.Hashimov's brother Ilham Hashimov and Colonel I.Mirzayev's son Elvin Mirzayev expressed their deep gratitude to the Supreme Commander-in-Chief of the Armed Forces Ilham Aliyev and the leadership of the Ministry of Defense for the high level of organization of the farewell ceremony.

Continuing his father's path, Mirzayev promised to join the Azerbaijani Army as an officer and take revenge on his father and all our martyrs.