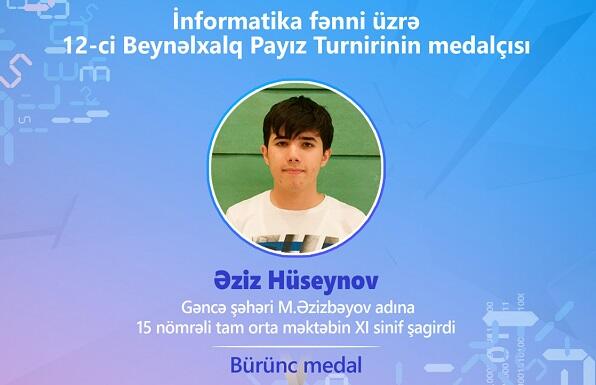 Ganja teenager won a bronze medal at the International Olympiad in Informatics!

The 12th International Autumn Tournament in Informatics which took place in Shumen, Bulgaria has ended. 403 participants from 17 countries tested their knowledge in the online competition. We are proud to announce that there is an Azerbaijani listed among the winners of the competition. Thus, Aziz Huseynov, an 11th-grade student of secondary school No. 15 named after M. Azizbayov in Ganja, who prepared for the competition with the support of Azercell, won a bronze medal! It is the second time that our schoolchildren have achieved high results in this competition. It is also worth noting that Aziz Huseynov won bronze medals at the 32nd International Olympiad in Informatics in Singapore two months ago, as well as at the Asian Pacific Informatics Olympiad in Indonesia.

Azercell always supports projects designed to promote and prepare qualified specialists in the field of information technology in our country. The company acted as the Digital Sponsor of the 31st International Olympiad in Informatics held in Baku in 2019. Azercell will continue its activity to identify promising students in the field of informatics and support them to improve their intellectual capacity.