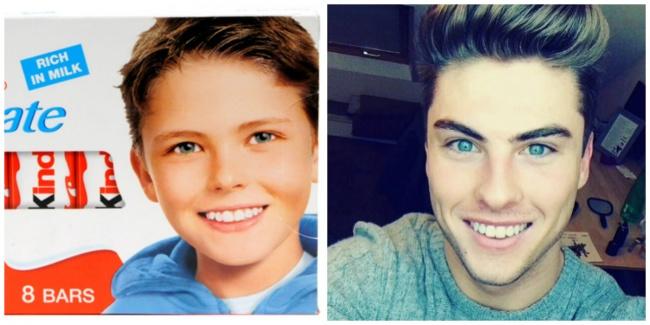 It often seems that the characters in commercials and advertisements never grow up or get older — they always remain just as we remember them on candy bar wrappers or our television screens. But time stops for no one, and the stars of commercials are no exception.

Axar.az have put together a selection of the most unexpected transformations of our favorite advertisement characters. Just look at how much they’ve changed!

The boy on the Kinder Chocolate packaging This youngster made his appearance as the face of Kinder Chocolate in 2005. Now, Josh Bateson is all grown up. He lives and studies in London and also works as a model.

Here’s his predecessor (or "older brother" in advertising) Günter Euringer was the face of Kinder Chocolate from 1973 until 2005, when the aforementioned Josh replaced him. Günter is now 52 and works as a cameraman. He’s also written an autobiography with the title The Chocolate Boy.

The guy from the Marlboro adverts Darrell Winfield was one of a small number of real cowboys who played a role in a series of adverts for Marlboro. In 1968, he appeared on posters for the tobacco company for the first time. He stayed loyal to the brand, continuing to smoke their cigarettes, but this led to a sad end. In 2015, he died of lung cancer..

Colonel Sanders, the face of KFC Everyone who’s ever set foot inside a KFC will recognize this old man’s face. But many people aren’t aware that the logo is actually based on a real person: the founder of the company and creator of the brand’s special recipe for fried chicken, Colonel Sanders.

The little girl from the Pepsi commercial

At the end of the 1990s and start of the 2000s, one cute curly-haired girl became the star of a series of Pepsi adverts. It turns out that this was actually the sister of famous actor Jesse Eisenberg (The Double, The Social Network). Her name is Hallie Eisenberg, she’s now 24, and she is also a full-time actor, having starred in Bicentennial Man and Holy Rollers. She also works on Broadway.

The girl from the Dr. Pepper advert

From 1963 to 1968, Donna Loren was the public face of Dr. Pepper, appearing on numerous occasions on posters, radio, and television. Loren was not only a singer but also an actress, appearing in numerous US movies.