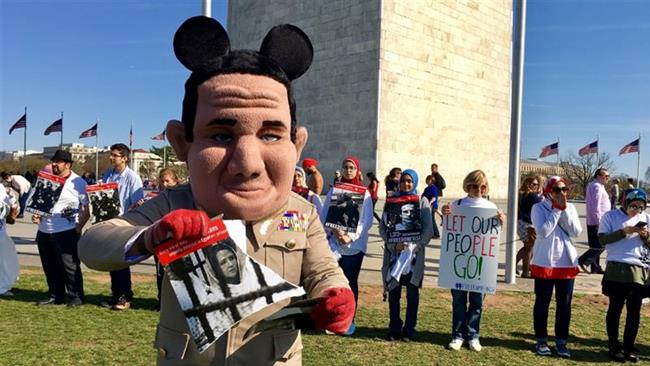 Protesters in the US capital have urged President Donald Trump to grill Egyptian President Abdel Fattah el-Sisi over his government’s human rights record, as the White House prepares to roll out the red carpet for him later on Monday.

Dozens of people gathered at the Washington Monument on Sunday and held a vigil to remember thousands of political prisoners in Egyptian prisons.

The highlight of the protest was a man wearing a giant mask of Sisi on his head, who went around and shred to pieces signs held by others with his bloody gloves.

The protesters condemned Trump’s decision to invite the Egyptian strongman, who rose to power in 2013 after leading a coup that led to the ouster of Mohamed Morsi, the country’s first democratically elected leader.

“We're giving $1.5 billion to an autocrat who has killed thousands of people, who has imprisoned tens of thousands of people, including Americans,” Mohamed Soltan (pictured below), an American who was jailed in Egypt for nearly two years, told Al Jazeera. “We're here to shed light on their plight.”

Rights groups say the putsch and the draconian security measures that ensued have killed hundreds of people. More than 20,000 people have also reportedly been arrested. UK-based rights body Amnesty International has also raised the alarm over rampant forced disappearances in the country under Sisi.

The violent crackdown led former President Barack Obama to halt major drills with Cairo and ban the sales of strategic weapons to the country.

Calling Sisi a “fantastic man,” however, Trump has promised to protect Washington’s 1-billion-dollar-plus billion in annual military assistance to Cairo, despite some attempts to cut the funding.

According to a White House official, the Trump administration plans to handle such “sensitive issues” as human rights “in a private, more discreet way” than his predecessors.

It was not clear if Trump was going to bring up the case of imprisoned American NGO worker Aya Hijazi, who has been accused of running a child sex trafficking network and using children in anti-government protests.

“We need to tell the world what kind of man Trump is bringing to the White House,” Soltan said.

Rights groups raised the alarm over Trump’s disregard for the human rights situation in some Arab kingdoms, after his administration decided to ignore the Bahrain’s heavy-handed crackdown on protesters in order to sell F-16 fighter jets to the monarchy.

More protests were planned across the US on Monday.