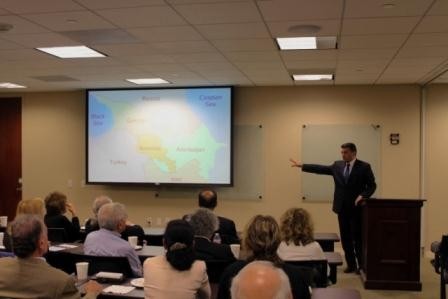 The documentary film “Objective Baku: How Hitler lost the battle for oil” was screened in Los Angeles on May 15, 2016. The film highlights the strategic role of the Azerbaijani oil in achieving the victory over the Nazi Germany.

The screening of the film was co-hosted by the ‘Save a Heart Foundation’ and Azerbaijan’s Consulate General in Los Angeles.


The film was produced with the support of Azerbaijan’s Heydar Aliyev Foundation, and aired in May 2015 by the National Geographic channel in 26 countries. Produced by Arzu Aliyeva, the film speaks about Hitler’s plans to invade Baku (Azerbaijan), which was then providing 80% of oil for the Soviet Union. Thus, four out of five Soviet aircrafts, tanks and trucks used in the course of the Second World War ran on fuel produced in Baku.

Greeting the guests, the famous cardiologist Dr. Yzhar Charuzi of the ‘Save a Heart Foundation’, stressed the importance of the documentary for highlighting the aspects of the World War II, which are still generally unknown. He congratulated the film producers with an excellent job bringing these historic facts to the public at large.

Speaking afterwards, Azerbaijan’s Consul General in Los Angeles Nasimi Aghayev elaborated on the film and its great role in educating younger generations about the tragedies of the World War II. Mentioning the enormous sacrifices made by the Azerbaijani people both in the battlefield and home front, the Consul General noted that out of 700,000 Azerbaijanis conscripted to the front around 400,000 perished fighting against the Nazis. He said that this loss, which constituted around 10% of Azerbaijan’s total population then, was almost equal to the loss of the United States in the same war. Stressing the strategic importance of the petrol extracted by tireless Azerbaijani oil workers, Nasimi Aghayev said that without the energy supplies from Azerbaijan, the Soviet Army would have been unable to defeat the Nazi Germany and the whole course of the World War II could have been quite different.

Then the film was screened, which was received with much applause. Following the successful screening, Consul General Aghayev responded to questions from the audience.