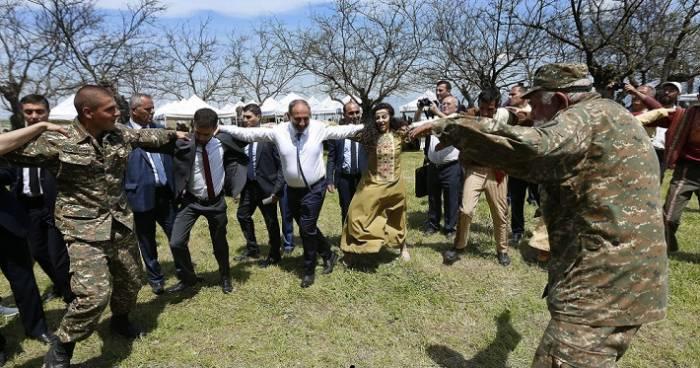 Yalli played by Armenian PM Nikol Pashinian at the event held on the occasion of the 27th anniversary of occupation of Shusha was the Azerbaijani Yalli which called Chimankend.

Rauf Bahmanli, a senior scientific worker at the Baku Music Academy named after U.Hajibeyli, said this in his statement to Kult.az.

He said that very few people have information about the "Cimenkend" yalli:

"Armenians present folk musics of Azerbaijan in all over the world as their folklore. From the beginning of the century, from 1920 to 1927, our dances and music have been collected. At that time, Armenians learned these dances because they lived compactly with us. Armenian composers used Azerbaijani music in their works. Even Armenian dances that you can see in internet are all dances of Azerbaijan. They copied our dances with making a different name for each of them. There are some dances that they event have not changed their name.

I have obtained the notes of "Cimankend" from Bayramov Musa Mahammadoglu, a well-known zourna performer from the Hallavar village of Pambak, Armenia (West Azerbaijan). This yalli consist of two parts. There is a difference between both the first and the second parts of the voice of the Yalli played by Armenians and the "Chimankend" sounds. Our "do" note is used as the leading tone of the Shur chart. Armenians can't do that. Only our zourna singers can get this sound."

P.S. Armenian Prime Minister Pashinyan attended a ceremony on the anniversy of occupation of Shusha and played a Yalli which stolen from the Azerbaijani people, in the occupied Azerbaijani city.